Skip to content
Table of Content show
1 The Difference Between an Albino Cat and a White Cat
2 What Are The Health Risks Associated With an Albino Cat?
3 Which Genetics Cause a Cat to Become an Albino?
4 Interesting Facts About Albino Cats
4.1 Albino cats are rare
4.2 Temperature-sensitive albinism
4.3 Albino cat health
4.4 Albino cat temperament
4.5 Some albino cats have reduced hearing
5 Summary

The Difference Between an Albino Cat and a White Cat

Just like human beings, there are also albino cats. Some people have confusion when it comes to distinguishing an albino cat from a white cat. The difference between albino cats and white cats can be found in their skin and eyes. For albino cats, the skin color looks pink because of the reflection of the blood flow. In a real sense, the skin color isn’t pink. Since they lack melanin, there is a reflection of light in the eyes, making the color light blue or reddish pink. On the other hand, white cats have pink skin and different colors for the eyes.

What Are The Health Risks Associated With an Albino Cat?

Albino cats need a lot of care since there are health risks they face. Here are some of the health facts you need to consider about albino cats: 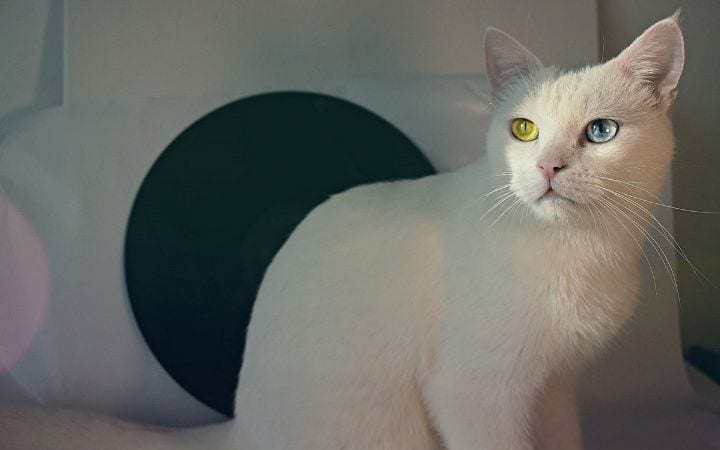 Which Genetics Cause a Cat to Become an Albino?

Albino cats have an alteration in their genes that makes them different from other cats. Albinism comes from a gene called the TYR. The TYR gene determines the presence of tyrosinase, which is an enzyme that is needed by the body to produce melanin.

Melanin is a pigment that determines the color of a cat’s skin, eyes, and fur. An albino cat is born without a TYR gene or born with a damaged TYR. It is this genetic abnormality and the lack of melanin that makes a cat an albino one.

Here are fascinating facts about albino cats that you need to know:

Albino cats are very few compared to other cats. This is because the albino gene that prevents the making of pigment is rare as well. The albino gene is recessive, meaning that a kitten will only inherit it from its parents to be albino.

Two genes are responsible for the pigment in cat hair to varying with the skin’s surface color; the Burmese color concentration gene and the Siamese color concentration gene. These genes are also types of albinism since they also control the production of tyrosinase. As the skin’s surface temperature increases, there is inhibition of tyrosinase production; hence, no pigment is formed. When the temperature cools in places like the nose, tail, paws, and ears, the pigment is made.

The health of an albino cat will vary depending on the breed to which it belongs. For instance, an albino Persian cat is at risk of contracting kidney disease and brachycephalic syndrome. On the other hand, an albino Siamese cat is more prone to cardiac and respiratory illnesses compared to other cats.

An albino cat’s temperament depends on its breed. Its socialization and upbringing also contribute to its personality. There are some physical consequences of being albino. For example, albino cats tend to be photogenic. The absence of melanin in their eyes makes them uncomfortable in bright light.

Some albino cats have reduced hearing

Such cats will be frightened when they see someone appear whom they didn’t hear approaching.

An actual albino cat is very rare. If you have one, make sure they get the special care they deserve since they are very delicate.