Doxycycline For Dogs: Uses, Dosage and Side Effects

Doxycycline is an antibiotic from the tetracycline group commonly used in veterinary medicine to treat a variety of conditions and diseases in dogs and cats. Tetracyclines are a group of broad-spectrum antibiotics, and they all have a similar basic compound. Tetracyclines are either isolated from Streptomyces bacteria directly or semi-synthetically from the isolated compounds. This group of antibiotics was discovered in the 1940s.
At the moment, on the market, there are no veterinary-approved products, but veterinarians are prescribing 100mg capsules, 50mg tablets or 25mg oral suspension of doxycycline for dogs.

In domestic animals, doxycycline for dogs is used to treat microorganisms such as Borrelia, Leptospira, Rickettsiae, Chlamydia, Mycoplasma, Bartonella, and Bordetella.

All tetracyclines act as a bacteriostatic by inhibiting the protein synthesis of the ribosomes, and by altering the permeability of the cytoplasmatic membrane of the susceptible organisms.

What Are the Uses of Doxycycline for Dogs?

As an antibiotic with a broad spectrum, doxycycline for dogs is used to treat several different conditions. The most common conditions in which the veterinarian might prescribe doxycycline are:

It is very important not to use this broad-spectrum antibiotic lightly and without a veterinarian prescription and guidance. This is a very potent antibiotic, and if used in a situation when it is not needed can lead to resistance of the dog to the drug and, if potentially needed, one day for one of the diseases mentioned above not effective.

Side Effects of Doxycycline for Dogs

In a case study conducted by B. S. Schulz, DrMedVet, and associates, they reported that 18% of the dogs that were given doxycycline were experiencing nausea and vomiting, 7% of the dogs in the study had diarrhea and 2.5% of them developed anorexia.

These findings show that this antibiotic is very potent and heavy for the liver, the organ through which this drug is excreted from the body.

Because of cases like these, it is suggested that all dogs that are taking doxycycline for any of the diseases mentioned above to be given some type of liver supplement in the form of pills or oral suspension.

Doxycycline should not be given to pregnant dogs. During pregnancy, there’s the risk of bone abnormalities and teeth discoloration in the developing fetuses.

Long-term therapy with tetracyclines can lead to overgrowth of bacteria non-susceptible to this antibiotic, and fungi.

Doxycycline is an antibiotic that has interaction with almost everything else that might be given as a medication. Always remember to ask your veterinarian if any of the supplements your dog is taking might interact with doxycycline.

In general, any oral antacids or oral iron will interact with the absorption of doxycycline. Because of that, make sure that you give this antibiotic and the supplements 2-3 hours apart.

If a dog suffers from epilepsy and is taking phenobarbital, prescribing doxycycline in combination with phenobarbital might affect the way the pet will metabolize the antibiotic.

Patients on blood thinners, such as warfarin, if given doxycycline, must be monitored closely. The antibiotic might interact with the clotting ability.

Dosage of Doxycycline for Dogs

Dosing of doxycycline for dogs is different depending on the infection.

For general infections, doxycycline is given 3-5 mg/kg orally every 12 hours for 7-14 days.

For infections of the urinary tract and soft tissue infection, wounds that won’t heal, doxycycline is given 4.4-11 mg/kg orally every 12 hours for 7-14 days.

For chronic infections with Ehrlichia Canis, doxycycline is given10 mg/kg orally every 24 hours for 30-42 days.

For the treatment of granulocytic anaplasmosis in dogs, doxycycline is given 5 mg/kg orally every 12 hours for 14 days.

For the treatment of Lyme disease, doxycycline is given 10 mg/kg orally every 24 hours for 21-28 days.

For the treatment of Leptospirosis, doxycycline is given 5-10 mg/kg orally every 12 hours for 14 days.

These diseases are the main reasons veterinarians prescribe doxycycline for dogs. Be aware that this is a potent and heavy drug, and you must comply with all directions on how to give the antibiotic provided by your veterinarian.

How is Doxycycline given to Dogs?

Doxycycline is available on the market in the form of a capsule, tablet, and oral suspension. It is advised to give doxycycline with food to avoid stomach upset, diarrhea, and vomiting. Never give another dose of doxycycline if your dog vomits in the next hour after getting the antibiotic.

The capsule and the tablet can be mixed with food. Never open the capsule to pour the powder onto the food. Removing the capsule will make the drug ineffective. If your dog does not want to eat the capsule or the tablet with the food, put it in a little piece of butter and put it directly in the throat behind the tongue. This way, the dog won’t be able to spit the antibiotic, and the butter will help ease the way down the throat to the stomach.

Doxycycline for dogs is a powerful antibiotic from the tetracycline group. It is used in veterinary medicine to treat a variety of infections in dogs and cats. The most common reasons your dog might get a prescription of doxycycline are E.canis infection, Lyme disease, Leptospirosis, Anaplasmosis, various respiratory infections resistant to other antibiotics.

Always follow the guidelines prescribed by your veterinarian, and never give doxycycline to your pet without a veterinary consult. 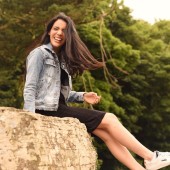 Arais is a writer and virtual assistant for pet business owners and veterinarians. She is a graduated animal care assistant and has done work experience in veterinary clinics. She is going to start a degree in Veterinary Nursing In Ireland this year! When she is not writing, creating content or petting her three rescued cats, she's volunteering in an animal sanctuary and fostering kittens!

Why I Love Veterinary Medicine- By Natasha Boycheva