We did an article about Nematodes not so long ago that covered the most important intestinal and non-intestinal species regarding companion animals. This article completes the chapter on Endoparasites where we will describe the general characteristics of Trematodes and Cestodes, as well as the characteristics of their most relevant representatives.

Trematodes, or also known as flukes represent a class of parasites that can be rarely found in companion animals. They usually raid the small intestines where they cause minimal damage unless there is a large infestation causing mild pathology. The trematodes are a class of worms whose morphology is characterized by flat and oval-shaped bodies. More than 10.000 species of flukes are known with worldwide distribution. Their size can range from about 5 mm to couple cm, but most of them do not exceed 1 cm. Most of the trematodes parasitize in turtles, frogs, and fish.

Alaria alata infections don’t show any evident clinical signs and the parasites can be found in dogs, cats, wild carnivores and very rarely humans as final hosts. The final diagnosis is achieved using flotation method evaluating the presence of eggs in feces. Frogs and fresh-water snails are considered to be intermediate hosts. As we said, there is a minimal zoonotic risk especially when people consume well-cooked intermediate hosts.

Cestodes, also called tapeworms are a parasitic class containing approximately 5.000 species. Tapeworms have a worldwide distribution and can range from 1 mm to 15 m and sometimes even more. These internal parasites can affect some invertebrates and the digestive tract and liver of all vertebrates, including people. Some species of tapeworms have the ability to attack single hosts, while others have life-cycles that require one or couple intermediate hosts and a final host.

Morphologically cestodes are bilaterally symmetrical and consist of either only one body segment (long) or a series of identical ones (proglottids). Their heads are named scolexes, whose purpose is to attach to the host. They lack a mouth, digestive tract, gas-exchanging organ and circulatory system and absorb food and necessary nutrients through the tough cuticle that covers the body. 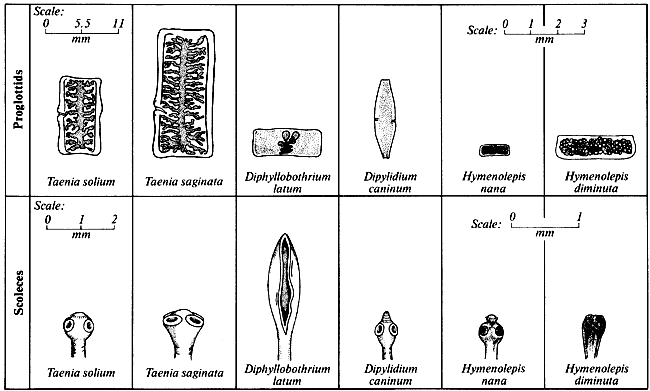 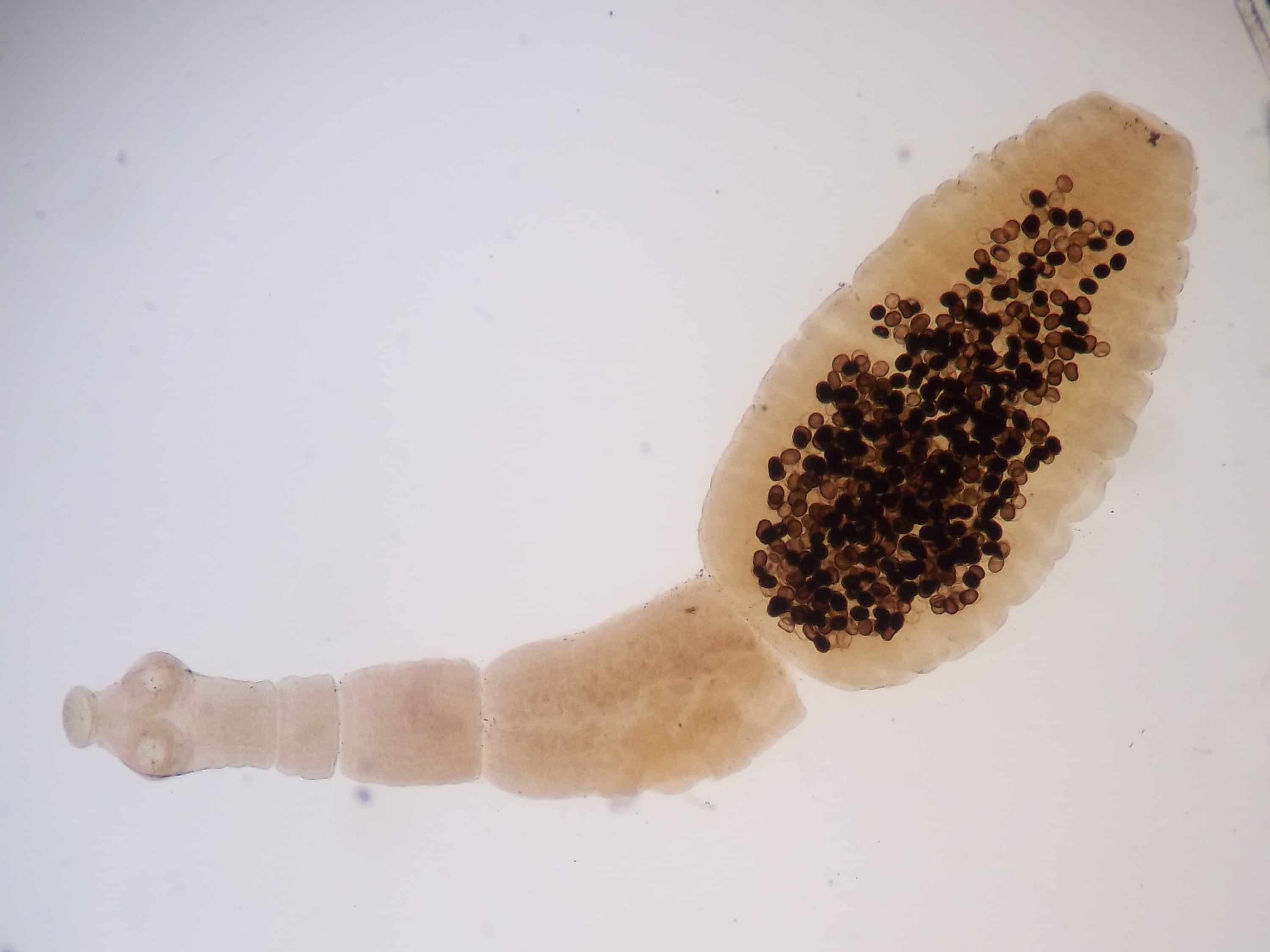 Echinococcus granulosus infections in dogs and red foxes (rarely) result in asymptomatic illness. Humans, primates and domestic ruminants are intermediate hosts, and cattle, pigs and sheep infections don’t produce apparent clinical signs. The identification of this tapeworm species is difficult as the segments of the adult forms of the parasite are small and sparsely shed. Their usual appearance is ovoid with a single genital pore and 2-3 mm of body size. The zoonotic risk is high and different systems in the body can be affected. Liver hydatid cysts can provoke large abdominal distension and potential rupture of the cysts can be fatal. When humans are intermediate hosts the lungs may be target-organs.

Echinococcus multiocularis develops mostly in rodents as intermediate hosts from which the larval stages pass on to dogs, cats, foxes, and raccoons as final hosts through ingestion. That’s why it’s of utmost importance that companion animals don’t consume and have access to carcasses or raw offal. The clinical signs of the disease are generally asymptomatic. There are few diagnostic methods used in diagnosing Echinococcus multilocularis. The detection of eggs using: flotation method, sedimentation or combined techniques aren’t very sensitive because it’s hard to differentiate these eggs from Taenia-types of eggs. Detecting antigen in the feces during the pre-patent period (28 days) has a sensitivity of more than 90%. The general conditions for the high sensitivity are the test is performed 10 days post-infection and more than 50 worms are present. There is a major public health concern regarding this parasite, as humans can develop alveolar echinococcosis after accidental ingestion of eggs shed by dogs and cats (rarely). This condition can lead to death if untreated. Dogs, pigs, and horses can suffer from cystic internal formations as well. 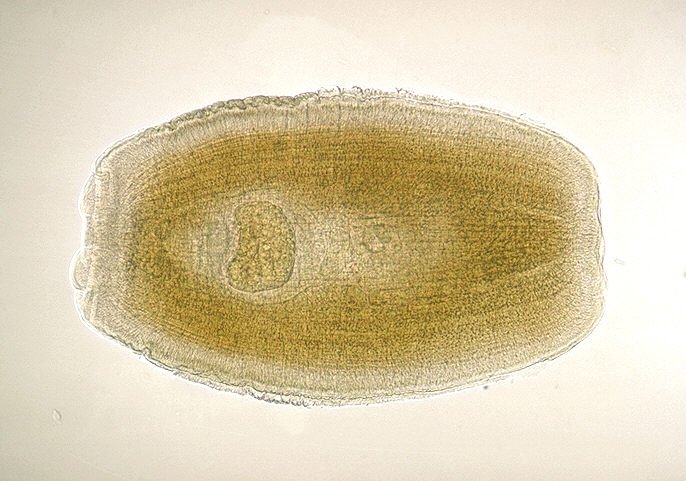 Mesocestoides spp. parasites have cats, dogs, and foxes as final hosts. The route of transmission is by ingesting larval stages of the parasite present in the tissue of prey animals. The patent period of the disease is several years, following a pre-patent period of 4-10 weeks. Practically, there haven’t been any clinically significant manifestations associated with Mesocestoides spp. infections in animals. The identification of infective larvae in the abdominal cavity or the liver gives a final diagnosis.

Cysticercus and coenurus represent intermediate hosts for Taenia spp. Dogs, foxes, and cats that ingesting larval stages of Taenia spp. present in the intermediate host can get infected, though the illness is mostly asymptomatic except when proglottid segments are found. The pre-patent period varies between 4 and 10 weeks, after which the patent period of few months to several years starts. The final diagnosis can be achieved by detecting eggs using the flotation method. In this case, 3-5 grams of fixed or fresh feces sample is required. Gross infestations result in proglottids appearing in the feces which can be clearly visible. 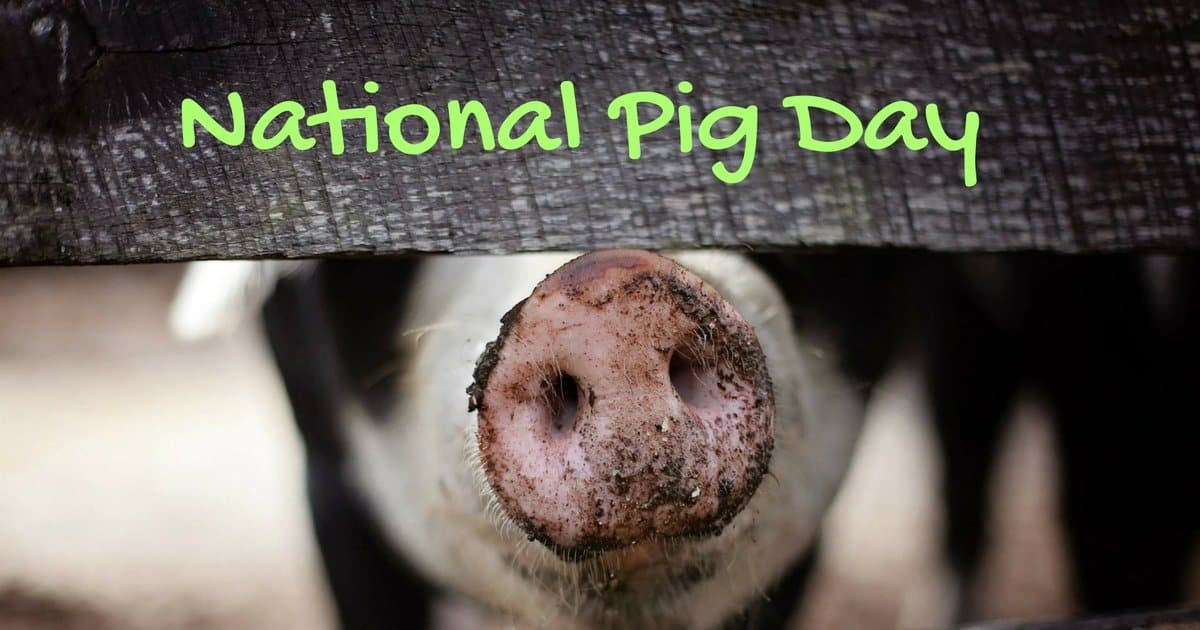 Next
What NOT to do if you find an injured wild animal
Comments are closed.