What is Pyoderma in Dogs?

Pyoderma in dogs is a bacterial infection of the skin. Pyoderma is the result of any type of cut or wound on the skin that is contaminated by self-mutilation from the dog. When dogs have any type of skin irritation, they will likely lick and scratch at the affected area in an effort to bring themselves relief.

Due to this, new bacteria is introduced to the affected area, which results in a skin infection called pyoderma.

Symptoms of Pyoderma in Dogs

Though pyoderma can be the result of several kinds of skin irritation, it usually presents in similar ways. Some common symptoms of pyoderma in dogs include:

Pyoderma can be present on any part of the skin, but is most common on the abdomen, in the flank area, within skin folds, and other areas that dogs can easily lick or scratch.

Causes of Pyoderma in Dogs

When the skin is injured in any way, it will often result in irritation that can cause your dog to lick or scratch the area. By further irritating the skin with scratching or licking, this results in a shift in the beneficial bacteria that is present on the skin.

When the natural balance of bacteria is disrupted on the skin, this creates the perfect environment for an overgrowth of yeast and bacteria to brew. At this point it will become a vicious cycle, as the infection will only continue to become more and more itchy.

Since pyoderma can be the result of any kind of skin irritation, there are several causes of pyoderma in dogs. Some of these include:

Pyoderma is often diagnosed with a physical exam and a discussion on a dog’s medical history. Veterinarians are usually able to come to a conclusion based on the appearance of the skin and the dog’s behavior leading up to the visit, but it’s ideal to perform diagnostics to rule out other causes.

With any infections involving the skin, it’s always best to perform a skin scraping and cytology, fungal cultures, diagnostic blood work to rule out any hormonal imbalance, and a referral to a dermatologist of this seems to be a recurring issue.

Pyoderma is typically treated with antibiotic therapy for a minimum of 3 weeks. This is usually done in conjunction with topical treatments such as medicated benzoyl peroxide or chlorhexidine shampoos, along with topical sprays that include these ingredients as well.

Common antibiotics to treat pyoderma in dogs usually include enrofloxacin, amoxicillin, cephalexin, or clindamycin. If a dog ever experienced a recurring case of pyoderma, it’s best to perform a skin culture and antibiotic sensitivity test to make sure you are using the proper antibiotics for the infection.

Prevention for pyoderma will involve the prevention of the initial irritation itself. Since pyoderma is usually the result of an initial skin irritation, you can help to prevent pyoderma by treating the underlying cause of any skin irritation.

This means having your dog on flea and tick prevention, assessing any areas that your dog is scratching or licking immediately, addressing any skin allergies, and preventing your dog from further irritating an area by making them wear an e-collar.

Overall, pyoderma is a common infection in dogs that has an excellent prognosis when addressed at the first sign of symptoms. Make sure to understand the basics of preventing initial skin irritation, and you can combat pyoderma in dogs.

If you enjoyed this article, make sure to take a look at our article on the Increase in Flea Allergy Dermatitis in Dogs and Cats on our blog. 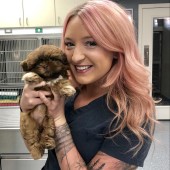 Euthanasia – How to deal with it as a veterinary professional